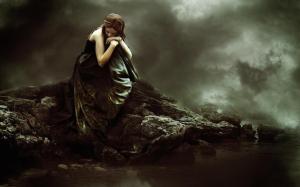 Loneliness is sitting in the cell of your own body

You can hear the faint laughter or warm conversation

But you don’t feel any of it because you are living in the prison of your own, lonely being

Sometimes, eyes glazed over and numb, you find you’ve wandered into the home of Depression

Then back again into the familiar ache of a heart that feels like some kind of broken stone, cracked in the deepest places

Only you know it can’t be made of what it feels like,

Sitting there in your fleshy skin and heavy bones

No one to call

Ah, you could, you know

There are people who care, which makes it all the worse

Get the fuck up

Pick up the phone

Perhaps we are in the House of Depression again, though the two share a door that never closes

What does it matter?

And then, isn’t there always One?

Because the impossibility of that fantasy is crippling

It is another New Year’s Eve

I can taste my loneliness

But the tears don’t spill over because they are trapped in my cracked, stone heart

3 thoughts on “On Loneliness”